Nearly 8 weeks out from my ankle injury and I’m finally back on dirt!  The Bad Bear Enduro at Bear Creek is one of my nearby favorites. I was really stoked to give this a go. I headed out on Friday with a few friends to pre-ride the stages. Man did I ride like crap! So stiff, so tense, such a struggle. Rusty, I guess. A lack of confidence. A decrease in finesses. I ate dirt over and over again on features that weren’t even the challenging ones! Man it was a tough pre-ride.  We sessioned different sections, trying new lines and eventually I started to feel like myself again. By the end of the day, I was bruised, sore and exhausted, but I caught a glimpse of the flow I was so in tune with in July.

As I geared up on race day my shoe strap ripped apart! Granted these shoes were my backup pair -they had a long and satisfying life, and needed to be retired – but my primary race shoes had broken boa straps and I hadn’t gotten around to replacing them (my bad). Likely the lace up boot I have to wear to protect my ankle was putting to much strain on the strap, and LUCKILY it happened in the parking lot and not mid-stage run. In another stroke of luck, my teammate had a roll of electrical tape, and was willing to donate it to me, so I was able to tape the shoe onto my foot and carry the roll in case the tape needed to be refreshed mid race. (Thanks Jeremy!!). 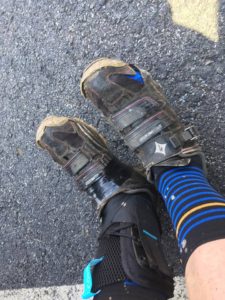 Struggling through Friday’s pre-ride to get a sense of that flow again paid off. I went into the race focusing on being relaxed, having fun and most importantly, staying upright. That goal might sacrifice overall speed, but a crash tacks so much time onto a run that, for me, it would be faster to go slower. It’s funny how self-doubt can be self-fulling. There were a few features that I had been hesitant about, and subsequently struggled with on Friday that flowed smoothly on race day. A relaxed mindset has such a huge impact. I was really happy to feel the near vertical drop & road-pipe cross over to another near vertical descent with 90 degree turn flow super smooth during the stage run – what had I been worried about? 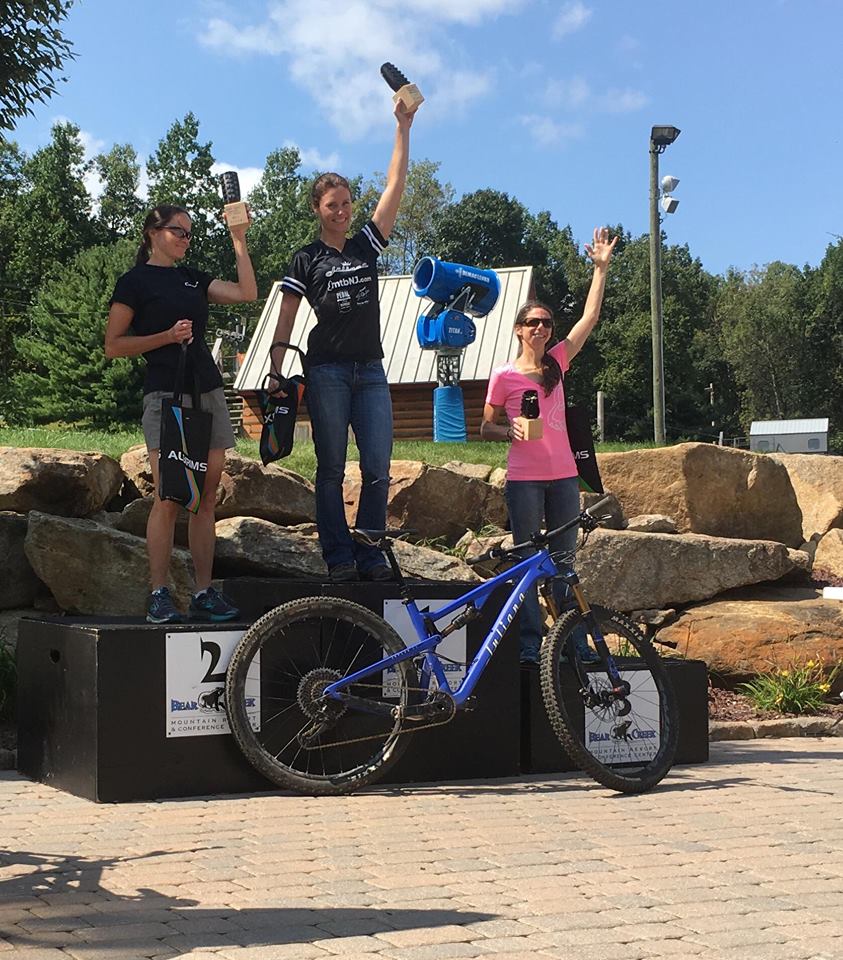 The Pedal Montclair Beginner’s Ride Series continued each Friday (except the Bear Creek Enduro Pre-ride). I enjoy hosting these, and I was particularly excited to see so many women come attend. I was also able to start scheduling private skills coaching sessions again.

The annual Leader Summit – an empowering, inspiring and educational weekend workshop – was mid September. I was able to attend a NICA specific Wilderness First Aid & CPR course. Really empowering stuff. Hopefully I won’t ever need those skills, but it’s confidence-inspiring to know what to do in a worst-case scenario. In the glove picture below we are learning about the transfer of bodily fluids. I always carry a first aid kit on rides I host/coach, and realized that in all that time, I didn’t have rubber gloves in it! (That’s been rectified). In the other pic below we are engaged in injury scenarios, – assessing our victims, determining their injuries and figuring out how to keep them alive.

I joined the coaches ride post workshop on Saturday. Look at all those mtb enthusiasts that are willing to spend time and energy to get more kids on bikes. So freaking awesome. I can’t wait to see what the student enrollment for season 2 is going to be!! 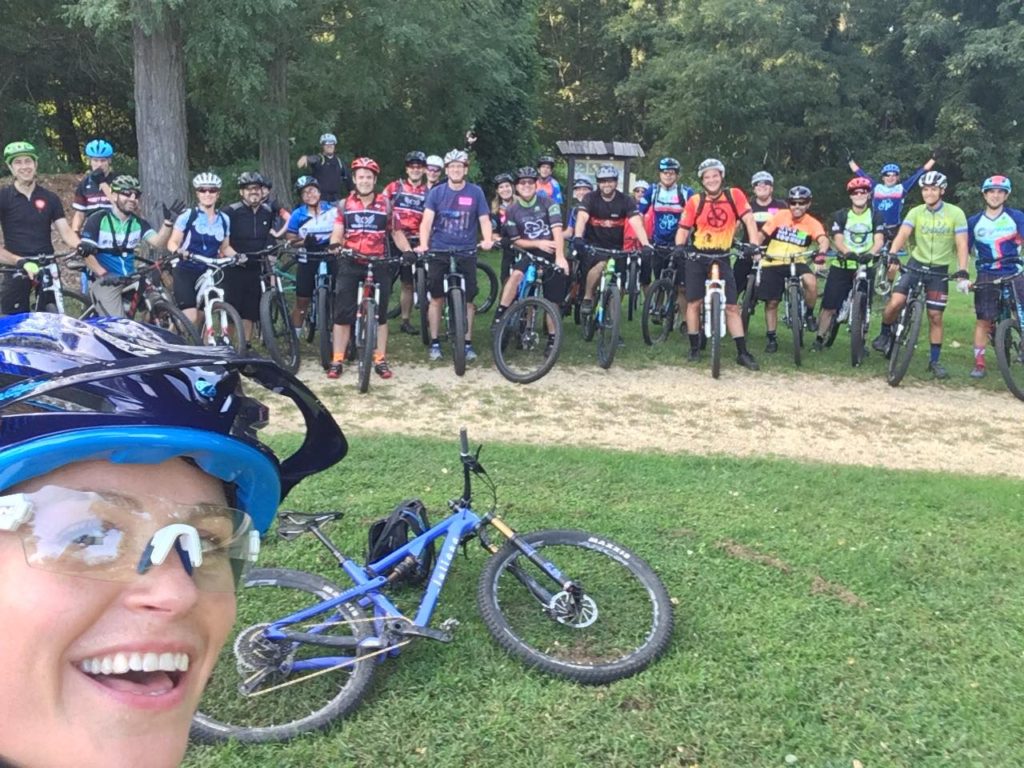 End of day one coaches pic:

Back into the full-on training schedule! I’m shooting for at least one endurance race this fall – the Erie 80 – as well as a few more enduros. My birthday is at the beginning of Sept, so the month started out with a team birthday ride! I was really heartened to have so many teammates join me for this ride. Some I haven’t seen all year. Plus, Sean’s birthday is the same weekend, so we celebrated him as well!

In an effort to clear out my basement, I pulled out my dusty CX bike to wipe off, photograph and sell. Soon as I look away my son jumps on it and starts riding around the block. Wouldn’t you know it’s the perfect size for him? We swapped out a shorter stem, and headed out for a bike ride. It’s awesome how much he enjoys it – the freedom, the speed. Our first road ride ended up a solid 14 and change in miles, with a stop at Applegates for homemade ice cream on the way home. Now he’s using it to commute to school, and to practice with clipless pedals. I had bought a pair of new shoes online after the strap tear at Bear Creek, but they were a little too big for me – they ended up being just perfect for him, though! Glad I didn’t opt for the neon pick pair!

I can’t believe how fast he was charging up some of the hills – it won’t be long before I’m struggling to keep up. And here he is, slightly annoyed at me for making him change his own flat tire. Yes I could do it much faster, but some things you just have to suffer through.