I hadn’t planned to race this event, but I put in enough volunteer time course marking on Saturday and MTBNJ had enough available team members to work the race on Sunday, that the team owner, Norm, encouraged me to race it. After mulling over whether or not this was a good idea — I had taken a mental and physical vacation from training the past week — I decided I had nothing to lose.

Sunday morning I worked the race registration table. 8:30-ish I put my gear on, put my make-shift cooler in the pit area and lined up. I skipped my usual warm-up (there would be plenty of warming up on lap 1).

Since I haven’t raced anything over 25miles all year, I wasn’t sure how my legs would handle the extra mileage. My plan was to keep a higher than usual cadence in an attempt to flush out the ongoing lactic acid buildup. 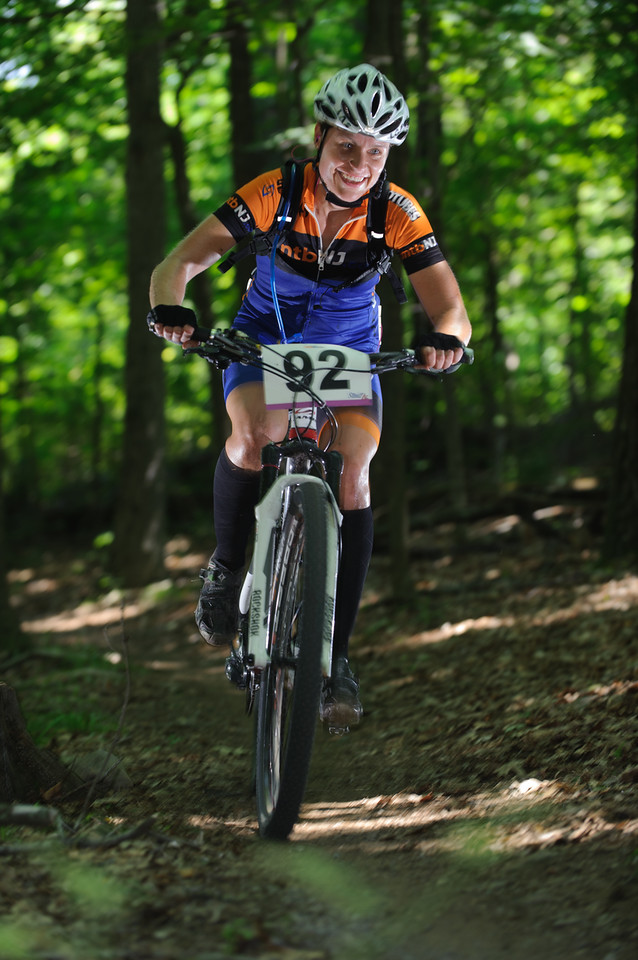 I was determined not to go too hard out the gate so when Norm called ‘Go’, I settled into 3rd position. Tina pulled us all down the prologue gravel road. Into the first single track Jane pulled ahead and I stuck to her wheel. Jane lead the first few miles and I tried to assess our pace, could I maintain this? Yeah, I think so.

We popped out onto the climb up to the aid station and Jane started to slow down. I assumed this was her way of telling me it’s my turn to lead, so I pulled around her and pressed on. I reminded myself not to push it, there is a lot of race left to go. Into the next section of single track the trail doubled back, so I had a view behind me . I realizedI was pedaling solo.

I was pretty satisfied with my pace, it felt like a decent tempo that I could maintain for a while, I had my music on and settled in for a while.

The trails felt fast, there were a lot of punchy climbs that Utah had pointed out while course marking. I know these rather steep, albeit short, climbs were really add up if I took them slow, so I made every effort to charge into them, using my momentum to get up instead of powering up.

I know a number of the women in this field target these longer races, and would really shine on the last lap, when I’ll be dragging. Thinking about this helped keep my speeds maxed and my cadence high.

Swinging through the first lap, I took a moment to grab a banana and headed right back out. The temperature was climbing steadily and I really started feeling the heat.

Second lap the trails were much more populated. I started coming up on riders. Riders were charging past me. Some rides latched on to me, or I to them. Staying true to my strategy, I really tried to max out the descents, push on the flats and roll the climbs. In the back of my mind, I was just waiting for the other women to catch me, I didn’t want them to, but I knew they were coming. The aid station dumped cold water on me – with the temps nearing 100, it felt like heaven, if only for a few moments.

On a long false flat in the hot sun, under the powerlines a woman in my class chugged past. Damn. She was looking solid. I tried to stick to her wheel for a while, but I couldn’t hold on. I had consumed all of the 2 liters of water from my camel back and desperatly needed a refil from the feed zone. A few miles later I came through the lap and teamates helped me swap camel backs, peeled me another banana and got me rolling with minmimal time loss. The camel back was COLD, having been hidden in an iced cooler all morning and it was delicious. This 1.5 liter pack had sports drink in it. I figured it would last me the last 15 miles, but I had guzzled it dry before the aid station at mile 6 on the lap. My leg cramps were really starting to threaten complete lockout, I’ve no doubt the sports drink I just guzzled had been too concentrated. 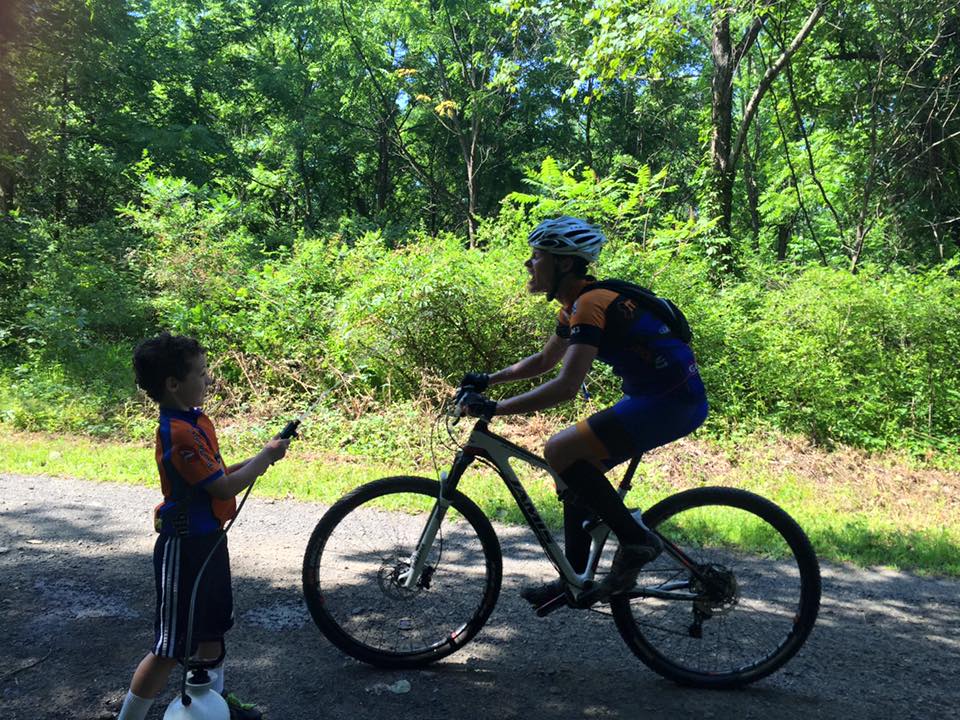 I sufferredup the long road climb to the aid station, which was running low on water at this point, where they were able to scrounge up enough to refil my camel back. Life saver!

I can tell my pace has slowed considerably on any inclines and flats. I’m still trying to optimize my momentum to get up the punchy climbs, but it’s obvious I’m not rolling quite as far as the first two laps. The course is now littered with bikes and people lying on the side of the trail, legs up on trees, fighting off cramps, dehydration, dealing with mechanicsl and everything in between. It’s like a war zone.

I’ve lost all awareness of the women in my class. I’ve no idea how far behind first I am or how far third is behind me. It’s survival mode now. I’m exhausted – I know that this is the point when I start getting tunnel vision, which leads to mistakes and falls, so put all my mental prowress, which is minimal at this point, into staying aware with my eyes pointed way down the trail. I can’t believe I’ve run out of water again.

Finally, finally! I pop out of the last trail and am onto the road that leads to the finish.