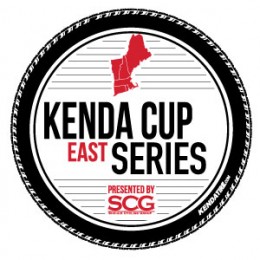 The course was really mild – could have been a CX course. A few punchy climbs – the one at the end was a pretty decent incline, plus it was chewed up loose dirt – and it became more loose each lap. There was literally, a single rock which was a smooth roll-up, and a complete drop off the other side, but only 2 feet high, maybe. If there was a bit of a landing area it would be fun to manual off of it,  but the course immediately turns, so a slow roll down was the only way to go. The rest of the course was a mix of twistys and fire roads that were covered in wood chips (leg-sapping soft). There was a single section of roots, and a small section of mud/mud puddles that were pretty peanut buttery by the last lap. The single track was always short bits connecting the fire roads – I would bet that there were more miles on fire roads than on single track – I’d say 40/60 split, but I’d have to look at a map.  So the overall feeling here is that this is not a course to suit my strengths.

I was feeling strangely lonely for my family on the drive up. Maybe because there were so few people I knew at the race, and it was a much more populated race than the others I’ve been to so far this year. The only face I really recognized was Nick Lando – and every time he saw me in the woods (as the trails run next to each other) he’d cheer for me. I’m sure he has no idea how much that really cheered me up.

It was great to line up with a such big group, I think there were 14 Pro women (and another 15 or so in cat 1, although we started separately).  We had to form 2 rows, I stayed in the front. I thought I picked a good side (left) since the right side would get pinched into a tree, but my start was fumbled, and I got pushed off the road into the grass – not ideal. I quickly regained the fumble and very quickly worked into the 6th spot.  The group stretched out as the track became single file along an extended uphill curve (good visibility to see who’s where). I passed the blue girl in 5th. I stuck to 4th’s wheel like glue – mashing on the fire road to keep up.

I quickly realized I could take the corners faster and should get in front of her. So on the open section I did just that. The first part of the course the fire roads are shot sections, so I kept ahead of her, I’d gain time in the twisties, she’d gain time on the open roads. This went on for the first half a lap, and then the course opens up into more fire road than single track and she passed me. The girl in blue got me on one of the last fire road climbs and I never saw either of them again.

I didn’t see any other females after that, so I trucked on, trying to keep a solid effort up.Mentally, it’s easy to ‘check out’ when it’s I’m riding all alone. Each lap I’d think of something new to focus on – cornering, looking ahead, maintaining speed. By the last lap, there were 2 particular turns I was annoyed I had been braking through that I finally had the lines down and the confidence to sail through them. I knew I was lagging on the last 2 laps, so I made an effort to stick to any guys wheel that passed me. I noticed a huge difference on the last 2 laps – normally I’m slugging up the hills at a snails pace, and I didn’t feel like that at all  – in fact – I could spin up them and even put some power into it. A lot less drag. The last nasty kicker I powered up – which was just shocking – I’d never be able to do that on last years tank. Awesome way to finish.

Overall, I had a pretty good race. I didn’t mind the length – 25 miles (last year I would have been terrified).  Considering this course played to my weaknesses, a mid pack finish is just fine.

You can also checkout my blog on Pinkbike, where I post the H2h Series Event write-ups and other articles: