The Grundle Short Track series by MTBNJ.com has had 2 sick races so far. 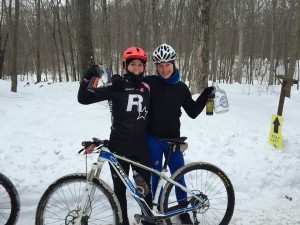 The MTBNJ crew did a fine job of packing down the race course. Using snowshoes, snowmobiles, skis and boots over the course of a few weeks, we compressed the 2 feet of soft snow into 6 inches of hard packed snow.

The trail was suitable for regular mountain bike tires, but absolutely ideal for fat bikes. I was lucky enough to borrow my teammates fat bike for the women’s 10am race. What I hadn’t expected, however, was that the “skinny” tires from the 9am race would act like rototillers and churn the entire course into 6 inches of granular sugar snow, making the course nearly impossible to ride, even on a fat bike.

That may sound like a terrible situation and reason enough to get grumpy and annoyed, but despite the awful trail conditions, the atmosphere was positive and upbeat. Racers were trudging through the course, running and walking large stretches, but smiles and encouragement were everywhere. Some races favor a ride’rs skill, fitness or strength, this one was mental determination and sheer perseverance. 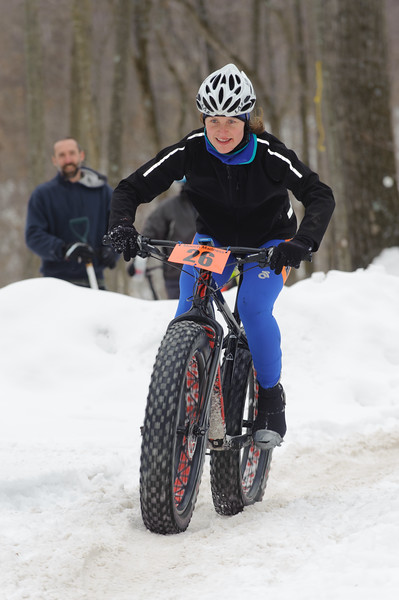 The women’s field started 2 minuets after the men’s sport class. I charged off the front and started catching the boys at the top of the first climb. The narrow trail left limited passing opportunities. I trudged along, attempting to ride, mainly clumsily falling and running the bike. Fire road sections enabled passing and I was able to free up and barrel down the descents.

By the second lap the ruts had fully taken over the course – especially on the descents and I took a fantastic header into an ice-covered log on the side of the trail. The ice cut up my gums, chin and lip. The impact into the snow meant that everything was instantly iced and completely numb, so I couldn’t tell the extent of the damage – only that there was blood dripping onto the snow and my teammates were rushing over with looks of horror on their faces. Woody grabbed a quick photo (which I’ve yet to see), I ‘tested’ my nose – it seemed ok, so I hopped back on the bike and started pedaling.

Eventually my face warmed up and I could tell that it wasn’t too serious, but I certainly backed off the pace for the remainder of the race. At the end of the day, sure I felt silly that I face-planted, but I was happy that I kept on trucking.

I was sure that this race would be a ghost town after the miserable riding conditions of ST1, but to my unbelieving eyes, the women’s field was actually bigger than the previous week, with nearly every rider returning for a second go! Norm, MTBNJ owner and Short Track Director, kindly switched up the race order, letting women & sport men have the primo trail conditions at the 9am start.

MTBNJ spent the entire week digging out the course for race #2. It seemed like an absurd undertaking to many – ‘they’re shoveling the woods? that ridiculous!’ But Norm was adamant that clearing the snow was the only way the race course would be enjoyable. It was an insane amount of hard labor shoveling and snow-blowing the trail, but the result was an absolutely EPIC race.

The women were set off first. I charged up the fire road and made sure I was in the #1 position heading into the trails. Having pre-ridden the course a handful of times, I was confident I could take the initial rocks & log obstacles at speed. Barreling through the course without another soul around was awesome. After so many trainer workouts in my dank basement, charging through the trail unimpeded – I felt completely un-caged for the first time in months. 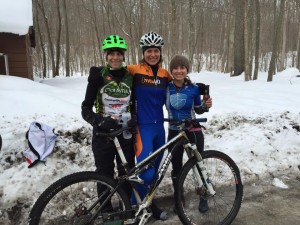 Into the second lap I start catching the guys. Although some of the trails were too narrow to pass on, there were more opportunities than the previous week and everyone seemed to be willing to give way. The overall speed of the course was light years faster than ST1.

I maintained a solid pace and picked off riders one by one, using the moments when I couldn’t pass to recover and be fully ready to sprint when a passing opportunity arose. I kept it up for the duration of the race and finished with a solid lead. At one point I knew I had the win locked in, but I didn’t let that knowledge affect my effort.

I went into the race hoping for decent conditions and a reasonably enjoyable race and ended up having an absolutely fantastic experience that left a giant grin plastered across my face for days.

I can’t wait to see what ST3 has in store!

« Is it really worth hiring a cycling coach? Race Recap: Grundle’s Short Track 3 & 4 »